Funerals became elaborate affairs during the Victorian period. The rich expressed their grief through extravagant funerals and grand monuments, whilst poorer families were encouraged to spend more than they could afford to avoid the stigma of a pauper burial. Many of the funeral traditions we follow today developed during this time, including wearing dark clothing, known as mourning dress, and using an undertaker or funeral director. Some famous sayings and superstitions also originated in Victorian times, like the practice of covering the mouth when you yawn to stop evil spirits entering. The dead were sometimes buried holding a chain attached to a bell outside the grave, so if the person had been buried alive they could ring the bell and alert those above ground. Hence the saying ‘saved by the bell’. 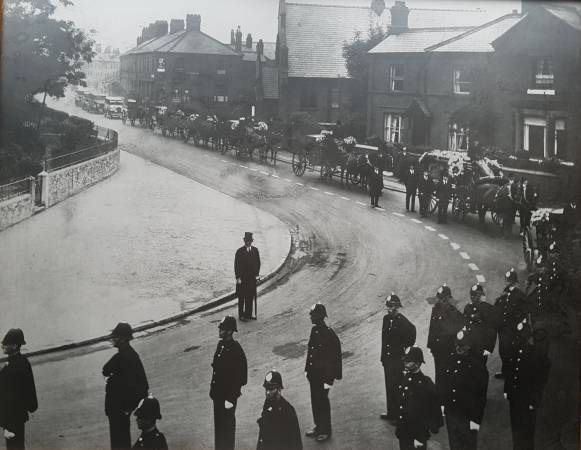 Ornate monuments became increasingly popular with those that could afford them. Many different types of stone were used, much of which was imported from places such as Italy. The styles of Victorian monuments varied with Gothic carvings, Celtic crosses and a large number of crucifixes. Later ones tend to be less elaborate and made of marble or grey granite. Modern headstones are typically black granite and similar in size and appearance, featuring symmetrical or asymmetrical curved tops.

Those of the early to mid-20th century are generally less elaborate, using marble or grey granite and in a mix of Gothic, Arts and Crafts, Edwardian Classical and Edwardian Baroque styles.

In Wrexham Cemetery, the largest and most ornate monuments are generally found on the high ground near to the West Chapel, close to the paths. This is where the graves of some of the wealthiest families are found. The graves of poorer people were marked by smaller headstones or not at all.